Yesterday the formidable Shamar Rinpoche, passed away. The news is devastating, but at the same time leaves us with a great sense of blessing and gratitude to have met this wonderful teacher and having received teachings from him.

He is also known as the Red-Hat Lama or the Red-Hat Karmapa, with Shamar being a contraction of Sha (zhwa – ཞྭ་) meaning hat or crown and marpo (dmar po – དམར་པོ་) meaning red.

I have been lucky to have met Shamarpa several times, but it seems I only took pictures on one occasion, which was at the Losar (Tibetan New Year) celebrations in 2005 in Kalimpong. 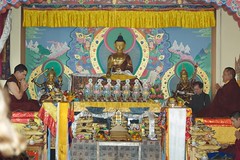 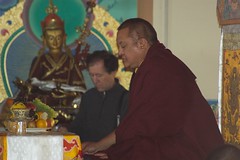