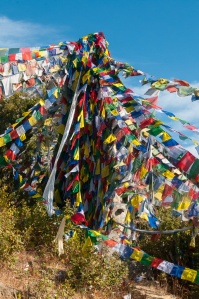 Pharping is a town south of Kathmandu. It goes by a few different names: The Nepali call it Pharping (sometimes pronounced Farping); The Tibetans call it Yangleshö (ཡང་ལེ་ཤོད་); and it was also called Phamting, because some say it is the birthplace of Phamtingpa (11th century CE), who together with his brothers was a close disciple of the great Buddhist master Naropa. Phamting could be derived from Phanathingu (the nine hoods), another name for Pharping, because of the presence of the great hood of the nāga king Lhakmachen.

On the way to the temple you pass some shrines containing Vajrayoginī statues and feet on a lotus, with the feet barely recognisable as they are covered in red dye.

It is also the place where Padmasambhava attained enlightenment whilst meditating in a cave. Inside the cave is a small Guru Rinpoche statue, candles and colourful lights. More remarkable is the hand print outside the cave. It is said that a student of Guru Rinpoche was so impressed by seeing the cave and to be in the presence of Padmasambhava that he slapped the stone and left an indentation in the shape of his hand in the rock face.

Outside the main Vajrayoginī Temple in the courtyard is a small stūpa. The temple itself houses an image of Vajrayoginī that is supposed to be made by Phamtingpa, although it has been restored and reconsecrated at a much later date by a local Buddhist Vajrācārya. Unfortunately at the time of our visit in January 2013 it was not allowed to take pictures within the temple.

Pharping, unlike Kathmandu, has solid rock underneath, and therefor the damage done to the town and the temple has been quite low. Kathmandu is in a sedimentary basin (the lake drained by Mañjuśrī), and this, combined with the relatively shallow epicentre amplified the grounds vibration and caused the extensive damage.