The Buddha Tooth Relic Temple may look centuries old; in fact a lot of effort has gone in to make it look like a Tang dynasty (7th-10th century C.E.) Chinese temple. In truth the building was completed in 2007 with the help of modern building methods. The columns at the front of the temple look like wood, but are concrete. 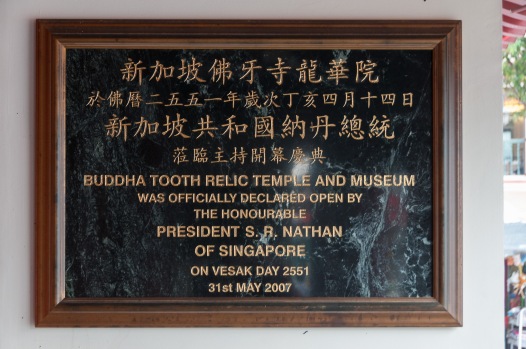 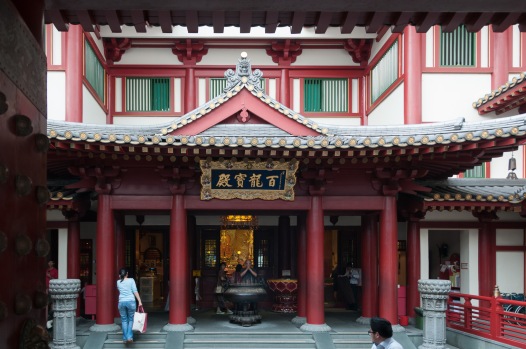 It is claimed the tooth comes from a collapsed Myanmar stūpa.

On the ground level in the main room is a huge statue of Guānyīn. On the walls of the main room are Buddha statues and gaus (Tib. ga’u, Buddhist amulet box). Each statue and each gau represents a sizeable donation by a devotee.

The temple is completely funded by donations, all 62 million Dollars (76 million Singapore Dollars, or just under 40 million pounds sterling according to today’s exchange rate).

The tooth relic is kept on one of the upper floors in a self cleaning room only accessible to the monks performing the required rituals. The beautiful ornate room is kept at constant temperature and humidity and the curtains are closed during the rituals. The actual relic remains out of sight and photography on these floors is strictly prohibited; no visitors will step on the beautifully decorated golden floor inside the relic room.

On the top floor is a garden with, in the middle, a huge Tibetan prayer wheel. On the walls there are further statues and gaus. Again each statue and each gau symbolise a donation, but in this case to cover the running costs of the temple and its maintenance.

In the basement of the temple is a dining hall where everyone can enjoy a vegetarian meal. The meals are free, but if you can afford it a donation is very welcome.

There has been some debate about the authenticity of the Buddha tooth relic. I think that with so much devotion of the people who built this temple, practising engaged Buddhism, propagating the dharma (Buddhist teachings) and supporting those who might not be able to afford a hot meal, the question of authenticity is of less importance. The tooth inspired people and that makes it a real Buddhist relic.