There are many stories of the previous lives the Buddha (jātakas).

One of the most famous stories is found in the Sūtra of the Golden Light and in many later Buddhist texts. The story supposedly takes place at the location of Namo Buddha Stūpa (Tibetan: སྟག་མོ་ལུས་སྦྱིན་ takmo lüjin) 40 km south east of Kathmandu. སྟག་མོ་ (takmo) means tigress, ལུས་ (lü) is body and སྦྱིན་ (jin) means to give. As the place used to be infested with tigers, the locals rather than naming it by its real name called it Namo Buddha (Hommage to the Buddha).

In one of his many previous lives the Buddha was born as the prince Mahāsattva. On one particular beautiful day the royal family – The king, the queen, and their three sons – set out to enjoy a picnic. The king found a suitable place for the picnic and while the servants were preparing the lunch, the three young princes took their bows and arrows and went hunting.

It wasn’t long until the princes encountered a tigress in her den. The two elder princes each took an arrow and strained their bows. Mahāsattva, the youngest prince, however convinced them that killing would be very wrong. It was then they noticed the tigress only just had given birth and was very exhausted and too afraid to leave the young cubs on their own.

The older princes explained that to keep the tigress alive it would require warm flesh of a fresh kill. The young prince though long and hard about this. He felt it was wrong to kill one being to save another. The older brothers decided it was time to return to the parents and so they left the tigress and her cubs.

Halfway back the young prince thought that countless lives he had been acting on desire, aversion and ignorance and to accumulate merit for a better rebirth he would need to be truly generous.

This is when he said to his brothers that he would join them shortly, but that he first had to take care of something.

He quickly ran back to the tigress den and found the starved tigress unable to move or even open her mouth. The prince took a stick and sharpened it and made a cut in his body to draw blood. The warm blood helped the tigress regain her strength and she pounced on the prince and devoured him, leaving nothing but his clothes, bones, hair and nails. 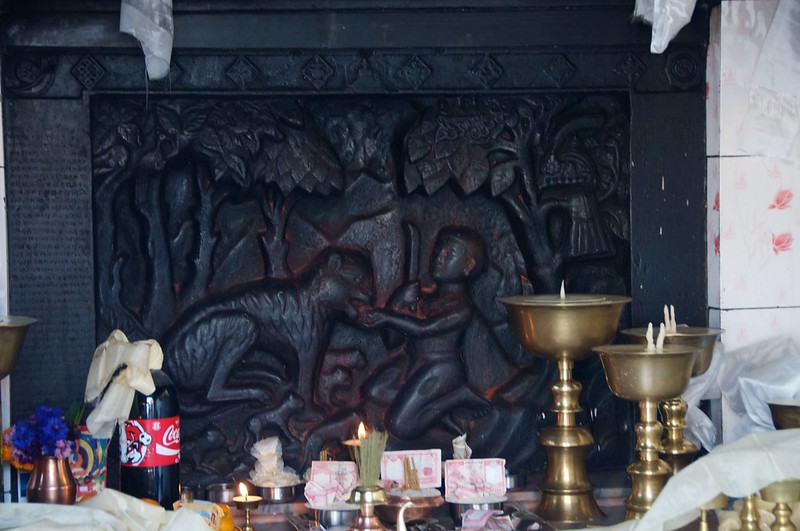 As the young prince did not return, the two brothers set out to find him. At the tigress den, now deserted, they found only the bones and clothes of their younger sibling and at the sight they were completely overwhelmed with grief.

Meanwhile back in the camp the queen woke up from a disturbing dream. In the dream she saw three doves flying through the air, but the smallest one was taken by a hawk. She immediately told her husband and he understood that something very bad had happened to their youngest child. When the two brothers arrived back in the camp with the bones of their younger brother. The royal family was completely inconsolable.

The little prince in the mean time was reborn in the Tushita Heaven; from there he noticed his family suffering tremendously from loosing him. He went down to console them and encouraged them to live a virtuous life. The king and queen were indeed consoled by the fact that their son had attained a higher rebirth and decided to live a more virtuous life. They made a small casket for the bones, decorated it with precious stones, and buried the casket inside a stūpa. 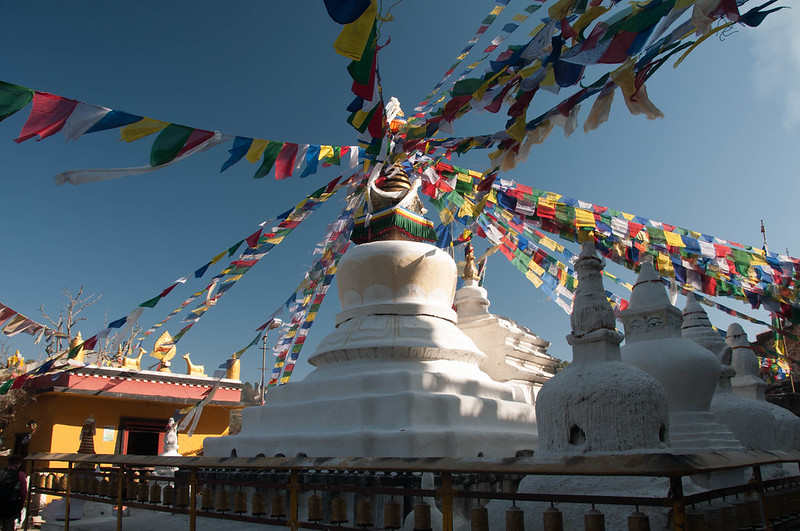