Once a day, there is a train leaving from Montréal and travelling south to Penn Station, New York City. After crossing the border and a thorough check at Rouses Point, the train meanders through the New York country side via Westport and Saratoga Springs. On its way it passes Lake Champlain and Lake George. If you’re lucky you even get a glimpse of Fort Ticonderoga. Some of the stations are so small that only one exit is available. After just over 8 hours the train arrives at Albany-Rensselaer station; New York City is still a further 3 hours away.

The main attraction of the trip is the close encounter with the Adirondack national park. Although the train doesn’t actually pass through it, the views are breathtaking.

On our journey out, the trees showed us bright oranges, yellows and greens, but the track was already covered by cast-off foliage and the speed of the train caused a flurry of different coloured leaves flying past our window. A few days later on the return journey only a few trees were still holding on to their leaves, not ready to let go just yet; not ready to accept that autumn had arrived and winter is coming. 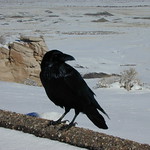