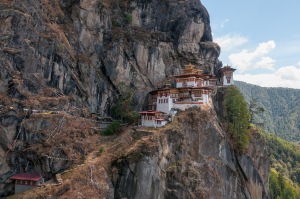 In 2010 I had the opportunity to visit Bhutan. Like every other visitor we visited the Taktsang or Tiger’s Nest (སྟག་ཚང་) near Paro (སྤ་རོ་).

The monastery sits precariously on the side of a cliff at an altitude of 3,120 meters, 900 meters above the valley. You cannot reach the monastery by car, so it is a two hour journey over a footpath that snakes its way up. 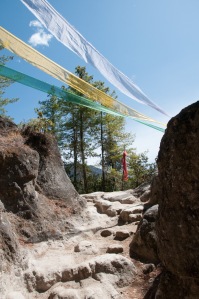 Goods for the Taktsang are brought up on horse back.

The path starts with a hike through a pine forest. There you’ll find some water powered prayer wheels.

The final stages to the monastery lead along a steep flight of uneven stairs, first going down and then up again.

According to legend in the 8th century, Padmasambhava (Guru Rinpoche) flew to Bhutan on the back of a tigeress (which may or may not have been a manifestation of his student Yeshe Tsogyal). He meditated on the location of the Paro Taktsang for some time. Back then it was merely a cave in the side of the sheer cliff.

It wasn’t until the 14th century that a monastery was established at the Taktsang.

A fire in 1998 nearly completely destroyed the monastery and the priceless artefacts it contained, such as statues and thangkas (ཐང་ཀ་ – Tibetan Buddhist Painting on cotton or silk). A butter lamp or a loose electric wire may have been the cause. One monk perished in the fire. At huge costs the monastery was restored and was completed in 2005.