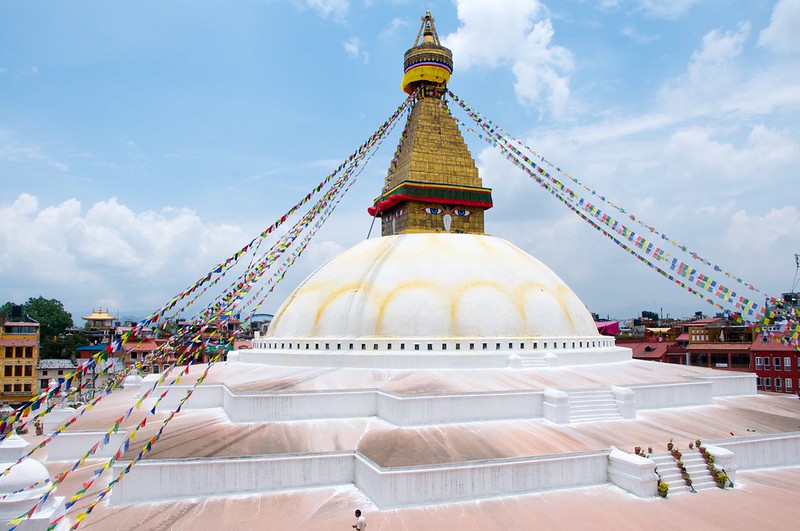 About 10 kilometers east of Kathmandu city centre you will find Boudhanath  (Baudhanātha) Stūpa.

It is said the stūpa contains the remains of the third Buddha Kāśyapa, the predecessor to Śākyamuni Buddha who is said to be the fourth Buddha and the Buddha of our time.

According to legend, after the demise of the third Buddha his body was buried at the location of the stūpa by an old woman and her four sons. The lady asked for permission by the king to build a burial mount and the king granted the her wish.

The burial mount was so beautiful and enormous that the high officials started to get worried. If an old poor lady would be able to build such a monument then they would be expected to build something even more glorious! So they petitioned the king to retract the permission. The king however refused with the words: “I have finished giving the order to the woman to proceed with the work. Kings must not eat their words, and I cannot undo my orders now”. So the stūpa was build.

According to a Nepalese chronicle of the late 14th/15th century CE, the Gopālarājavaṃśāvalī, the stūpa was founded by king Śivadeva towards the end of the 6th century; other sources claim it was king Mānadeva in the 5th century. Tibetan sources describe an excavation in the 15th/16th century finding the remains of king Aṃśuvarmā, who was prime minister under king Śivadeva and ruled until Śivadeva’s son became king. Also the Tibetan emperor, Trisong Detsen (Khri srong lde btsan ཁྲི་སྲོང་ལྡེ་བཙན་, late 7th century) is associated with the construction of the stūpa.