After reaching enlightenment under the ficus religiosa tree in Bodhgayā and the first lecture in Sārnāth at the age of the 35, the Buddha taught for a further 45 years. At the end of his life, the Buddha visited Cunda, a blacksmith, who offered him a dish called ‘boar ragout’ (it might have been mushrooms). After that meal, the Buddha fell violently ill. The blacksmith felt terrible, but the Buddha assured him that the illness had nothing to do with the food, and that having prepared the last meal for a Buddha would bring him great merit.

The Buddha asked the bikkhus (Pāli, Sanskrit: भिक्षु bhikṣu – monks) present several times if they had any questions left for him, as this time was their last chance to ask them. None of the monks had any questions, so they remained silent. 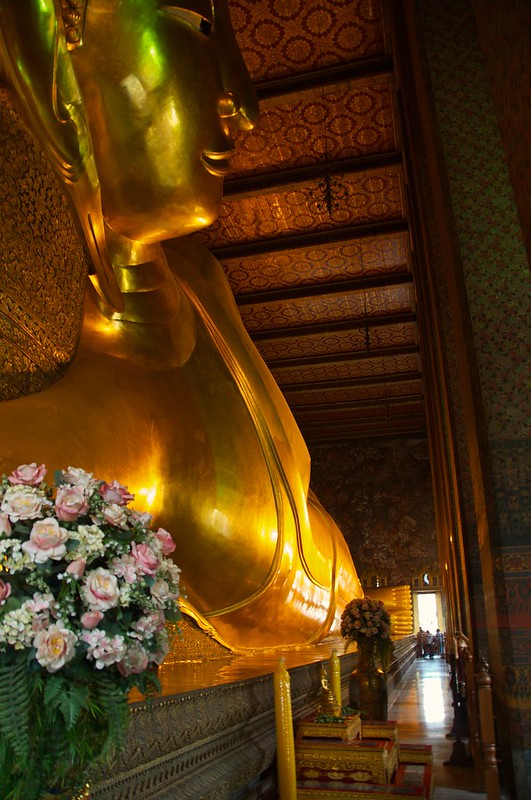 All composite things are perishable. Strive for your own liberation with diligence.

Reclining, supported on his right hand, he entered Parinirvāṇa. When his body was cremated relics remained, which were distributed among the Buddha’s most influential followers and into mount shaped monuments or stūpas. The remnants of the cremation stūpa in Kuśīnagara (now in Uttar Pradesh, North India) are still shown today. The pictures of the reclining Buddha are taken in Bangkok at Wat Pho.